When you’ve got Tinder-fatigue and are tired of rejecting online dating candidates with the handle CheerfullySporty who are the antithesis of either cheerful or sporty, you’ll be casting about for a niche venue to meet vaguely interesting men. If your couch-bound viewing has included late-night ESPN you may have considered Cross-Fit, if you have any remaining faith in Pete Evans you’ll be googling your local Paleo café and if you are on a desperate quest to find a single, dateable bearer of XY chromosomes you might have considered perennially on-fleek Bikram yoga.

40schick has taken one for the team, done the research for the sisterhood and is here to tell you that Bikram is NOT THE PLACE to meet a life partner.

Whilst there is a promise that sweating out every last toxin whilst contorting a body that is about as bendy as a chunk of 4 x 2 might provide you a sweaty selfie that you can plaster on Instagram with a triumphant use of #fitspo, its not going to be the place where you meet someone that you are happy to split a green smoothie with over breakfast into your later years.

I realise that you may be immune to the travesty that is men in a shiny faux-fabric given over-exposure via the weekend cyclists that invade beachside cafes with their barely-sheathed manparts on display like the rear-ends of lady baboons. If they are going to be there where you are slipping into your local to get a long black to accompany a read of the Sunday papers, you are unlikely to go all deer-in-the-headlights at the prospect of finding one in your local Bikram studio.

But it’s going to be tops-off girls.

And there’s no vanity here.

It may be that inner-city Bikram studios are filled with lithe male specimens who can totally own the baring of a shiny torso, but my suburban-based research exposed only dad-bods and a misguided Geoffrey Edelsten lookalike – none of which would ordinarily have dreamed of strutting shirtless, but feel that an overheated room provided adequate licence. 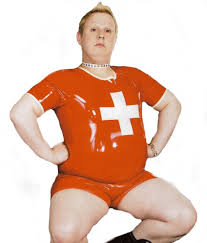 There are 26-postures that are going to unveil everything you need to know about your male Bikram counterparts, but none are so telling as the very first breathing exercise.

If you did spot someone who might be an eventual housemate, any ideas of peaceful Sunday sleep-ins will be dismissed when you hear them attempt the breathing drill.

As a newbie, if coming grips with just where to point your elbows isn’t tricky enough, any thoughts of spending slumber time with any of your fellow uber-sauna-inmates will be quashed by the disconcerting throat breathing that is not just encouraged, but is mandated on the out-breath.

You can’t see what everyone looks like on their out-breath, given you are encouraged to bend all the way back to the point where you can count the tiles on the back wall but what you are hearing sounds 100% Voldemort. 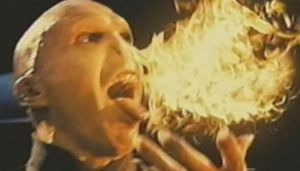 In the same vein that internet dating and snapchat seem to have implanted in the male brain unwritten licence to send you pictures of their favourite bits, something about being barely clad in an overheated studio seems to permit men to give you the complete up-and-down go-over in a way that would seem heinous in your normal social environment.

Sweating together appears to provide a permission slip for assumed intimacy, which just goes to show why so many Bintang-singleted Aussie males think that Bali is the natural home for lame-o pickup moves.

You’re not at your best

Assuming Bikram Choudhury himself has taken a beneficent view of your contributions to humanity and gifted you someone that is worthy of tops-off mini-lycra wearing glory, you are unlikely to be able to whip out a stunning example of your best-self to take him down. Why? As a Bikram newbie you will be:

None of this is attractive.

Probably better off cruising the sidelines of local footy looking to snag a Dad-bod.