A couple of weeks ago, I observed the first ‘we’re in splitsville’ announcement on facebook. Not by any rockstar, supermodel or reality TV D-lister, but by an everyday person. It was written in the style of a celebrity breakup, minus the ‘request for privacy at this difficult time’, and inclusive of a statement that the message was not posted in a call for sympathy, but just to avoid having to tell everyone one by one when they next met. A momentary quandary ensued as I contemplated whether pressing ‘like’ was appropriate. But there’s something efficient and appealing in this mechanism, and having been a person who announced her marriage breakup to her parents by text message some three months after the event, I can relate to delivery of news in that fashion.

What is far more tedious is the procession of celebrity breakup messages, and this week they were all topped by Gwyneth Paltrow announcing the end of her marriage to Chris Martin. Now I find Gwyneth particularly loathsome at the best of times, and on more than one occasion have wanted to inform her what she could do with her authentically-ancient rustic earthenware bowl of quinoa, hand-roasted grain by grain and nestling meditatively in a nest of shredded kale, but I have a general philosophy not to stoop to twitter trolling. She topped it this week by trying to out-zen every celebrity breakup that has gone before, describing it as a decision to ‘consciously uncouple’. In a week bereft of any kind of humour this proved to be fodder for every radio station, comedian and commentator as we all tried to understand if this was gluten-free-speak for divorcing.

From someone who has named her website after nothing (Goop) and her child after a fruit (Apple) we should be unsurprised to note new phraseology emerging from the Paltrow camp. However it seems to be very Gwyneth-esquely grounded in its origin from a term used by two divorce specialists in LA who aimed to bring ‘wholeness to the spirits of both people’ during the process (which is about as LA as you can get) 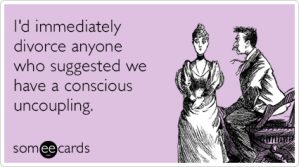 I’d imagine Gwyneth has had some time to contemplate (whilst inhaling bergamot essential oil and pondering the perfection of a lotus flower) the best wording of such an announcement, with the benefit of reviewing the announcement content alongside subsequent behaviour on the part of the couples in question. Here’s what she could have learned from those who inhabit the celeb-stratosphere.

“I had hoped this marriage would be forever” (cue collective groan as we all understood that it had been 72 days, which meant at flat-line amortisation rates the grotesquely OTT engagement ring had cost close to a lazy $28,000 per day)

“We remain friends and wish each other the best”, slightly at odds with Kris’s ‘I’m devastated to learn she filed for divorce” and comprehensively at odds with their subsequent behaviour which included him suing her for a divorce based on fraud whilst Kim worked simultaneously on a new handbag line and becoming impregnated with Kanye West’s child.

From Demi:  ‘there are certain values and vows that I hold sacred, and it is in this spirit that I have chosen to move forward with my life’

ie – you cheated on me, you SOB, and its going to be messy. And expensive. 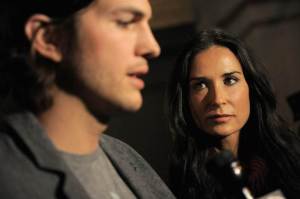 I realise we are going back to the archives here, but there was a nuance in this breakup announcement that was a little unique ie ‘we would like to explain that our separation is not the result of any speculation reported by the tabloid media’, said media being in a frenzy much like a Western Australian shark population circling a coconut-oil-basted clutch of surfers.

Sure, it was not a result of that speculation but a more fact-based scenario where Mr and Mrs Smith were taking their conjugal duties seriously off-screen.

For the record and in the interests of full-disclosure?

J-Lo…the roots of the Anthony downfall were grounded in the fact that she ever ditched Ben Affleck in the first place (actually, that whole thing was incomprehensible to me…)

As for you Gwyneth? My predictions are these:

Two – You and Russell Brand will be swapping yoga mats and harem pants in a Hollywood heartbeat.